Posted on February 18, 2014 by EssentialYoga Studio 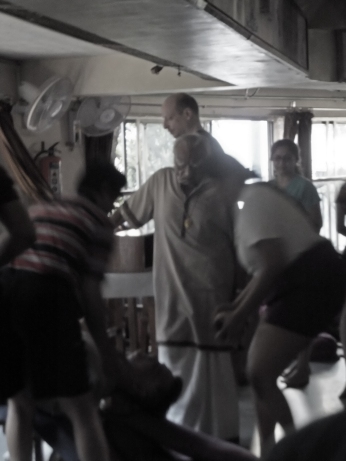 A young woman was hanging in rope Sirsasana when Guruji came over.  Instructions were given to bring a table.  He told her how to hold the sides of the table moving her into an intense backbend.

The pose is repeated. Guruji walks on.

“What is the ailment?”  I ask a senior teacher.

“I am not here to tell you anything, ask her.” She points to the student and walks away.

The young woman comes down from the pose and sits.  I ask her.

She signals me to wait, still recovering from the pose. Then she reaches for my hand, looks me in the eyes and says, “The heart.  Guruji’s helping me with my heart.”

Roberta Dell'Anno E-RYT 500, Certified Yoga for Scoliosis Trainer Owner EssentialYoga Studio. Roberta has been practicing yoga since 1988 and teaching yoga since 2004. She has studied extensively under master yoga teachers Patricia Walden, Zoë Stewart, Sri Arun H.S., Elise Browning Miller, and others. She completed a two year Iyengar Yoga Teacher Training program with Sr. Iyengar Teacher, Peentz Dubble in June 2017. Roberta has studied yoga at the Ramamani Iyengar Yoga Memorial Institute in Pune, India during June 2011, February 2014, attended Abhijata's 2-week intensive in Pune, India, December 2016 and BKS Iyengar's Centenary 10-day intensive taught by Prashantji & Geetaji, December 2018. She completed training and certification with Elise Browning Miller as a 'Yoga for Scoliosis' instructor in 2014, completed a 500 hour Hatha Yoga Certification program with AURA Wellness Center in 2005 and is registered with Yoga Alliance as an E-RYT 500. She has been a Certified Meditation Teacher since June 2007 and an Usui Reiki Practitioner since 1989. The studio provides individual & specialized privates, semi-privates, group private sessions, and yoga workshops. Roberta conducts local and out of town workshops. She specializes in yoga for scoliosis and back care. She uses props to help students and teachers of all levels transform their backbends, twists, standing and seated postures, as well as inversions like sarvangasana (shoulderstand). She also works with individuals who have physical challenges, specifically individuals with Multiple Sclerosis, CMT, Parkinson's Disease, scoliosis, and amputees in private, semi-private and group sessions.​​​
View all posts by EssentialYoga Studio →
This entry was posted in Uncategorized and tagged backbends, heart health, india, iyengar yoga, medical classes, pune, yoga. Bookmark the permalink.