Posted on February 27, 2014 by EssentialYoga Studio 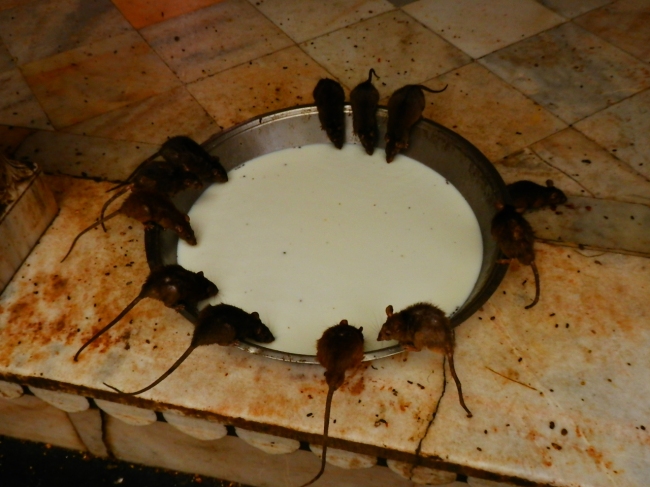 Mother Karni is the reincarnation of the Godess Durga.  She is said to have performed many miracles as a child and throughout her life.

One story tells of a woman who asked Mother Karni to save her son who drowned.  Mother Karni argued with Death and won his soul, but she could not directly bring him back to his human form.  She saw a rat on the ground and placed the soul into the rat.

Once he lived his life as a rat, he would return as a human.  The rats in the temple are the souls of departed relatives waiting to return to their human form.

In the temple devotees feed them, chant for them, and pray to Mother Karni.  I was allowed inside the temple but there is a small area where I was not allowed. I could stand from the side and take photos but I could not enter.  I asked my guide why and he said that since I have eaten beef (the protected holy cow) in my life, I would not be able to enter.

I sat for a while watching the rats scurry past, one runs up my leg and explores the workings of my camera.  It crawls up my arm, investigates my hair, jumps down to investigate my camera again then moves on.

I listen to the chanting of the couple next to me.  A little girl comes over to me and asks if I can take her photo.

I don’t see the white rat that symbolizes good luck.  I guess don’t need it, I’ve got all the luck in the world.