Posted on February 4, 2014 by EssentialYoga Studio

On my last trip to India I tried every new fruit I could find.  Now I have found some new fruits!  I don’t know what this orange one is called but it smells incredible.  I tasted a little and it doesn’t taste as good as it smells.  I asked a neighbor and the apartment guard what it is and neither of them knew, so they told me not to eat it.  Oh well, too late for that.

Here are some of the other fruits growing on the trees near my apartment. 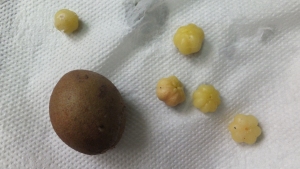 According to my neighbor, the little yellow ones are goose berries.   They taste a little like star fruit.  My housekeeper told me I should eat them with salt, and I did.  Very good!

I can’t remember what the brown ones are called.  When you pick them they squirt a thick white, sticky, glue-like liquid at you.  No surprise I was covered with it. My neighbor told me I have to wait until it ripens before I taste it.  It’s supposed to be delicious.

I’ll have to wait and see.